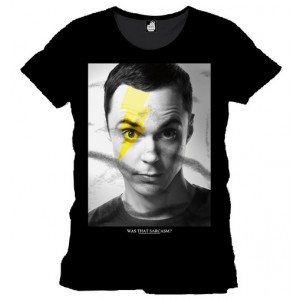 Sheldon Cooper is a very famous and loveable character among the viewers of the show and a lot of Big Bang Theory merchandise is made from his quotes.

The Sheldon Bolt t-shirt is the best one to wear if you are in a good mood. It is the best way to have fun and keep things on the lighter side. This t-shirt shows Sheldon Cooper with a funny face having and a yellow design on his right eye. It is in the design of a thunder bolt and that has a caption written at the bottom saying, “Was that sarcasm?” Now, that is an attractive t shirt and one of the best ones among the Sheldon Cooper t-shirts.

This Big Bang Theory Sheldon Bolt t-shirt will definitely look cool on you and it will surely create a good impression among the ones who love Sheldon Cooper or follow the famous TV series Big Bang Theory.

10 other products in the same category: